Welcome. You’re reading my first attempt at blogging.  Like most things in life, I’ve arrived at this party considerably later than most.  I’ve read blogs - some good, some bad - for almost twenty years without penning a single entry myself.  “Why now?” you ask.  Good question.

Until now, I didn’t feel like I had much to say.  And even now, I don’t know that I have much to say that is new or exciting.  But novelty is overrated in my opinion.  Do I really need the $160 12th edition of a Calculus book when it’s 3rd edition can be had for $4.50 on Amazon?  Has Calculus changed much in the last twenty years? Likely not, but the market says, "Yes." We'd do well to stick with old paths, at least in most things.

My sense is that there are others from previous generations who have things to say and they’re not being heard in the marketplace of ideas and cacophony of voices that have overtaken our public and private discourse.  I increasingly find myself thinking that the correct (or at least a very helpful) perspective on a given topic doesn’t have a voice.

Bloomfield Christian School’s success - if that’s the right word - depends on all of us having access to a better perspective than what’s passing for true, good, and beautiful in the mainstream.

Richard John Neuhaus was famous for saying that “politics is downstream from culture” and Henry Van Til quipped that “culture is religion externalized.”  If they’re correct, then politics is downstream from religion - which is to say our that our political life is rooted deep in the soil of our religious and theological convictions and it is those eternal realities to which we should give the most attention.

A Voice in the Wilderness 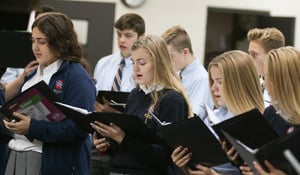 This will be a place to give voice to some of my thoughts about religion, culture, and (less frequently) politics, particularly as each bears on the formation of our young people at Bloomfield Christian School.

Sometimes I’ll post a juicy tidbit from someone else - a commonplace, maxim, quote or small excerpt.  Alternatively, I will have a few running “series” on things like “What is Christian and Classical Education?” or “Teaching Children the Truth” and so forth.  It will be something of a hodge-podge.  And self-consciously, an exploration of applying long-forgotten or habitually ignored truths to our present circumstances.  On this front, we agree with C.S. Lewis in his preface to Athanasius’s On the Incarnation (4th century) when he writes:

“We may be sure that the characteristic blindness of the twentieth century - the blindness about which posterity will ask, "But how could they have thought that?" - lies where we have never suspected it... None of us can fully escape this blindness, but we shall certainly increase it, and weaken our guard against it, if we read only modern books. Where they are true they will give us truths which we half knew already. Where they are false they will aggravate the error with which we are already dangerously ill. The only palliative (remedy - MB) is to keep the clean sea breeze of the centuries blowing through our minds, and this can be done only by reading old books.”

Old books.  Some of us love them because… well… we’re just like that.  But the real value in old books (and old ideas!) is that they’re intensely practical.

I pledge to only post things in this space that I believe will equip you to better understand BCS and how you can make the most of the time your children spend in our care.